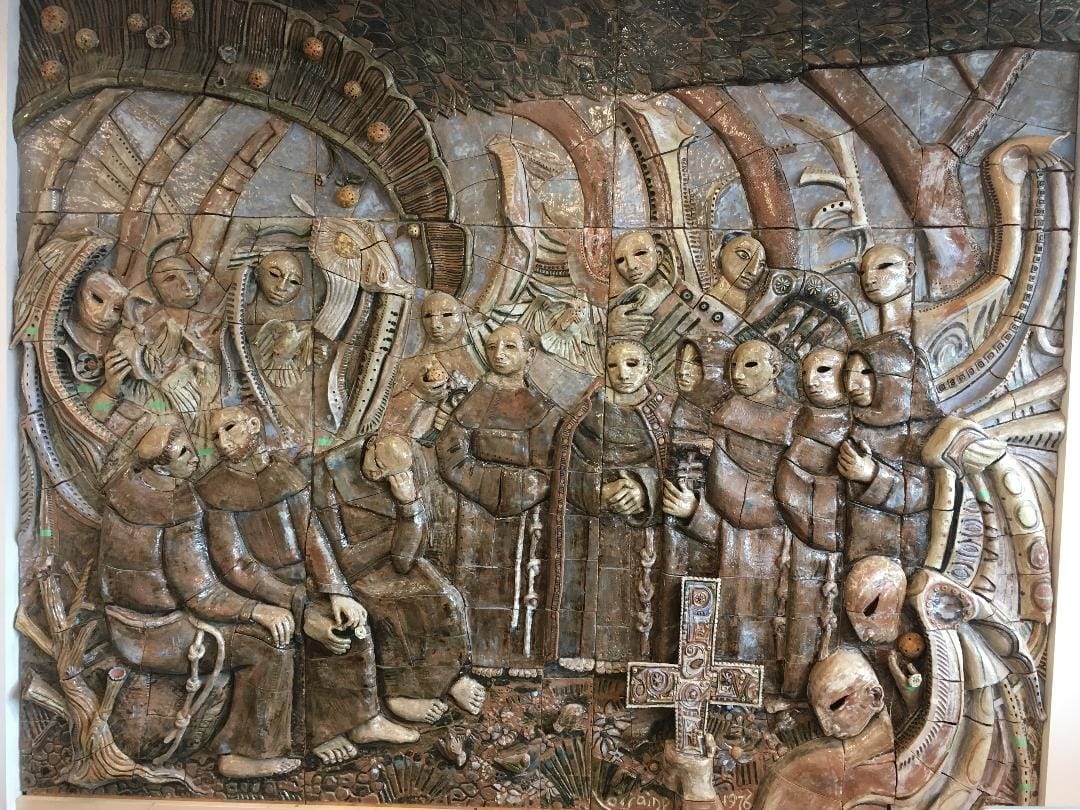 A Story of Art and Theology

In impeccable French, Fr. Donald MacDonald, OFM, agrees to talk about his university career: 50 years devoted to teaching at Newman Theological College in Edmonton. At the age of 84, he is on the threshold of retirement. “I know deep down that it’s time. I am certain that I made the right choice. I’ve done enough.” Still, he points out that he is not yet fully retired, as he has a few papers left to mark.

Yes, of course, he speaks of his position as dean of the faculty for several years. Of his work in the college’s administration. Of his years of teaching. Of his area of specialization, Christology. He discusses his career only when asked. He doesn’t want any recognition. It doesn’t seem that important, in his opinion. He doesn’t boast at all.

Although he has no regrets about his decision to stop teaching, you can tell right away that he loved his university career. He likes communicating his knowledge, his ideas, his beliefs, his convictions. You can picture him talking about of his view of theology for hours, with an open mind. “In my 50 years of studies and teaching, theology was never for me just an academic discipline.”

For him, theology must be lived out in daily life, not just in academic circles. “A theology that cannot be prayed or cannot be lived is not Christian, or Catholic, or Franciscan. The rupture between theology, spirituality and pastoral ministry – which happened in the 16th or 17th century – was one of the most serious catastrophes in the Church’s history. The theology of Vatican II succeeded – at least to a large extent – in overcoming this separation.”

This leads him to emphasize the importance of the laity in diocesan life. According to Fr. Donald, laypeople make a major contribution to the life of the Church, and yet, there are not enough of them in most parishes. He says without hesitation: “It is the laity who will save the Church.”

Among the laity are many women who are ready to take their place. During his career, he often taught young women. When asked whether it was more interesting to teach men or women, he merely laughs, adding, “It would be very rewarding for everyone to have more women in the Church!”

In the 1960s, Fr. Don had the privilege of meeting and becoming friends with a Canadian artist, Lorraine Malach. Malach, who died in 2003, left her mark throughout Canada, especially in Saskatchewan, Alberta and British Columbia.

The Story of Life, made by the artist Lorraine Malach. Photo credit: Royal Tyrrell Museum

A multidisciplinary artist (clay, watercolours, oil, egg tempera), Malach was passionate about paleontology. The renowned Royal Tyrrell Museum in Drumheller, Alberta, proudly displays one of this exceptional artist’s works. This massive work, titled “The Story of Life,” is made up of 10 large ceramic panels. Every year, thousands of visitors have the good fortune to be able to admire it in the Museum’s entrance hall.

A mural in motion

While they were still living in the former Edmonton fraternity, the Franciscans had the opportunity to contemplate daily a ceramic mural created by Malach. For logistical reasons, this massive work had to be left on the wall when the house was sold to a charitable organization.

In 2019, the Franciscan brothers, hoping to recover the work, received the help they needed. A benefactor offered to pay the costs of moving it. Moving the mural (which weighs around 2 tonnes) turned out to be a major challenge. They were even told repeatedly that moving it would be impossible. The mural had to be laser cut to remove it from its original wall and carefully transported to its new home, the Newman Theological College library. 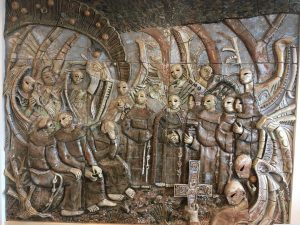 This artwork made by Mrs. Lorraine Malach is actually in the Newman Theological College’s Library, in Edmonton.

The work, which depicts Francis of Assisi and his friends, has a unique feature. Francis is not found in the centre, but over on the left. The movement that can be seen in the mural begins from his head, and then expands into a semi-circle to the other side of the mural. Through this movement, the eye always returns to Francis. In this way, we are led to discern this figure as being the main subject of this imposing piece (15 feet by 10 feet).

“One of the most important aspects of this mural of Lorraine’s is the interrelationship between the world of God (angels), humanity (the brothers) and creation (trees, flowers, etc.). In other words, in his creation God makes one whole: everything is interrelated, without distinction.”

Fr. Don and the Franciscans are thrilled to have the mural installed at the college. They are glad they can easily admire the work of their dear friend and can share this pleasure with their friends and the students. 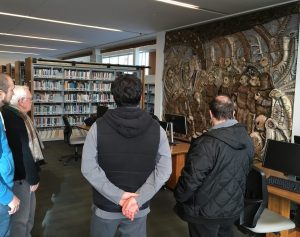 Father Don (wearing a scarf) in front of the mural, with visitors.

Impressed by her work and by her humble and simple personality, Fr. Don speaks of his friend Lorraine with great affection. A woman of conviction, she didn’t work for the money. She created complex pieces while living in extreme poverty. Regularly lacking raw materials to create her works, she often called upon donors for support.

Fr. Don tells a story. “When she needed some clay to finish a sculpture, she wrote a letter to a benefactor, convinced that God wanted her to do this. When she went out to mail the letter, she found a bag of clay on the porch.”

He goes on to share another anecdote, as if to support the first one. “She didn’t have a kiln to fire the clay; she had to fall back on the kiln that a library rented to artists. This rental came with a cost that she couldn’t always afford, and she often found herself at an impasse. One day when she didn’t have what she needed to pay for the use of the kiln, she got a call from the library explaining that she could now use the kiln free of charge.”

“Through these sorts of happenings, she saw signs that God wanted her to continue her work in the same way.” With no interest in financial considerations.

Once he is officially retired, you can easily picture Fr. Don strolling through an Edmonton park, reflecting on theological matters that are both in-depth and straightforward. You can imagine that he is pleased to have helped his students, women and men, to grow in their faith. And, at the same time, sad to be moving on. Of course, he plans to return to Newman Theological College from time to time. We’re sure he won’t have to be asked twice to wander through the library.