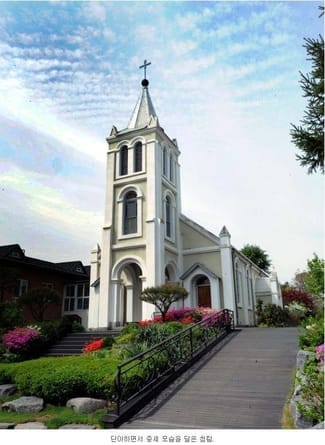 November 18th, the second part of the program of the celebration of the 80th anniversary of Franciscan presence in South Korea, began with the singing of the Canticle of the Sun, taken from Franco Zeffirelli’s film, Brother Sun, Sister Moon. It was sung in Korean by our Friars Yoachim Yoon and Paul Seo, and by our Korean sisters Marianna Jung and Sapienza Lee. While listening to this song, it became obvious that the male and female qualities of the Canticle of the creatures were here being highlighted.

Shortly after this song, I was invited to give a short address on the 80th anniversary of Franciscan presence in South Korea. To make my point, I posted a photo of the first Church of Taejon. There’s an interesting story behind this church. It’s the story of Dr. Williams, Methodist minister. It was told to me by Father Justin Bellerose:

«During the years 1955-1956, the Church of Taejôn remained abandoned, (due to the Korean war) with doors and windows broken or blown away and a sunken floor. Close to our friary, stood the Methodist Seminary, whose Director was a stylishly dressed American, Dr. Williams, pastor of the Methodist Church. He often passed near our Church and saw it in a pitiful, dilapidated condition.

One day, when I went to pay him a visit, he asked me the following question: “Why don’t you fix your church?” I replied: “Because we have no money.” Indeed, there was very little remaining from our savings of personal alms, after the first repair of 1955. We kept this small amount to ensure our daily food, to provide necessary objects, to pay the salaries of our employees and for urgent repairs. Dr. Williams then told me: “When you start to repair the Church, let me know!”

In the months that followed, I forgot the words of this brave Methodist minister. Finally, the repair of the Church began. One day, looking for a change of air, the thought came to me to pay a visit to Dr. Williams. He was a very friendly man and had pleasant conversation. During the meeting I had with him and his wife, he told me, point blank:

“Ah! You’ve started to repair your church and, in this regard, I have promised you something; just wait one moment.” He went to his office, and a few moments later, he returned with a check for $100.00. While giving it to me, he added these words: “I offer you this gift, not because you are Catholic, but because of St. Francis of Assisi. Every Sunday, in our seminary, we sing the Canticle of the Sun that your founder has composed”. What emotion I felt at this moment! It was an unforgettable event of my missionary life! »